1990 in the former Eastern Bloc countries. Launch of a new website!

We invite you to visit www.year1990.eu, which presents the events of the breakthrough year 1990 in the Central and Eastern European countries.

The year 1990 was a turning point in overcoming the communist legacy and shaping democracy in the countries of Central and Eastern Europe. In most of them, it brought the first completely free parliamentary, presidential and local government elections.

The year 1990 also marked the reunification of both German states. For the Baltic states, such as Lithuania - the first country in the region to declare its independence after 50 years of dependence on Soviet power - it was the beginning of a new era.

The Europe that we know nowadays was being born in 1990. It is worth making sure that the memory of this important period is restored.

On this site you will find:

- information about the course of events in 1990 in selected European countries.

- educational materials, including scenarios of workshops and lessons.

The website is available in English, Polish, German, Czech and Lithuanian.

The website was created as part of the project '1990/Year One. The democratic transformation in former Eastern Bloc countries'. It is carried out in Poland, Germany, Czech Republic and Lithuania, as part of the programme Europe for Citizens Programme - Strand 1. European Remembrance' and is co-financed by the European Commission. The project leader is the Krzyżowa Foundation for Mutual Understanding in Europe. 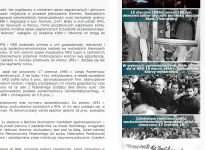