On 18 and 19 November, the results of the ‘1990/Year One’ project were presented in Berlin during two events aimed at teachers from Germany and Poland.

On 18 November, at Schönhausen Palace, during a conference organised for German and Polish teachers, Dr Robert Żurek talked to Markus Meckel, East German oppositionist, participant in the Central Round Table and, after the first free elections, GDR foreign minister. The starting point for the discussion was the German experience of the democratic transition initiated in 1990.

At the Palace, the exhibition ‘1990. Birth of a New Europe’ was also presented.

On 19 November, at the Centre for Historical Research of the Polish Academy of Sciences in Berlin, Dr Tomasz Skonieczny held a workshop for teachers from Germany and Poland. He discussed the importance of integrating the events of 1990 into the civic and history education programmes in both countries, and presented educational materials and the exhibition created as part of the ‘1990/Year One’ project.

The exhibition ‘1990. Birth of a New Europe’ is on show in Berlin until mid-December. It is presented at the Centre for Historical Research of the Polish Academy of Sciences in Berlin (Majakowskiring 47).

The event is part of the project ‘1990/Year One. The democratic transformation in former Eastern Bloc countries’, which aims to understand and raise awareness about the changes that took place in 1990 in the former Eastern Bloc countries. It is implemented in Poland, Germany, the Czech Republic and Lithuania, within the framework of the programme ‘Europe for Citizens - European Remembrance’ and is co-financed by the European Commission. 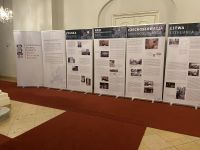